Behind the Scenes: The Originals Mardi Gras Finale in Georgia’s French Quarter

It’s Mardi Gras season! If you’re like us, Mardi Gras makes you think of more than just colorful beads and parades—it also reminds you of the Originals series finale!

To kick off the party, we wanted to share some behind-the-scenes info about the finale and how you can still experience a taste of New Orleans in Georgia’s French Quarter™! 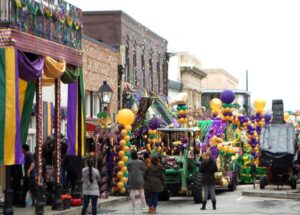 Filming the finale in Old Towne. Used with permission on 2/11/2017 by Rockdale Citizen

“When the Saints Go Marching In” was the final episode of the Originals series, marking the end of a 5-season saga. A few minutes into the finale, fans were treated to a lively Mardis Gras scene as Hope searched for Klaus.

Despite the convincing New Orleans setting, this scene and most of the series were filmed in Old Town Conyers, Georgia! From 2013 to 2018, ornate balconies, fake street signs, and even false storefronts transformed Center and Commercial Streets into semi-permanent French Quarters.

When the series finale came around, the crew went all out with extensive decorations that turned Center Street into a Mardi Gras scene fit for New Orleans. The storefronts were hung with purple and green banners. Mardi Gras beads were liberally distributed, and floats and marching bands flooded the streets. The festive affair filled the scene with balloons, banners, and costumes. A rain of confetti filled the air for a final touch, covering everything in purple, green, and gold.

Although the Mardi Gras parade was lively and happy, the end of the series brought bittersweet feelings to everyone involved.

In an interview with reporter Larry Stanford, Michael Jones (the location manager for the Originals) said, “I’m happy to wrap up our series on such a high note, but at the same time I’m going to miss coming and filming.”

The series finale also affected the townspeople, who loved the cast and crew filming in Conyers. “We were all sad, of course, as it felt like the ending of an era, but knew the cast and some of the crew were ready to explore other avenues,” said Christie, a local who’d been on-site for the majority of filming. She also mentioned that many of the crew stayed in the area to continue working on the Originals’ spin-off series, Legacies, which also films in Conyers.

The Rockdale Newton Citizen confirmed that about 20% of the production’s full-time employees live right in Rockdale County, and Warner Bros. will continue to film shows in the area.

Fun fact: you can still see some prop balconies and signs on storefronts around town, whose owners were given a choice to keep their French Quarter décor!

Some stores on Commercial Street kept their ornate balconies

Some fan favorites include the Sandwich Shop (the exterior of Rousseau’s) and Phil’s Pawn Shop (an often-featured white-columned building). An entire row of shops on Commercial Street kept their ornate balconies, and you’ll recognize the Celtic Tavern from its featured bar.

For a full tour of filming locations around town, come see us at Filmed in the South!