Behind the Scenes with an Originals Extra 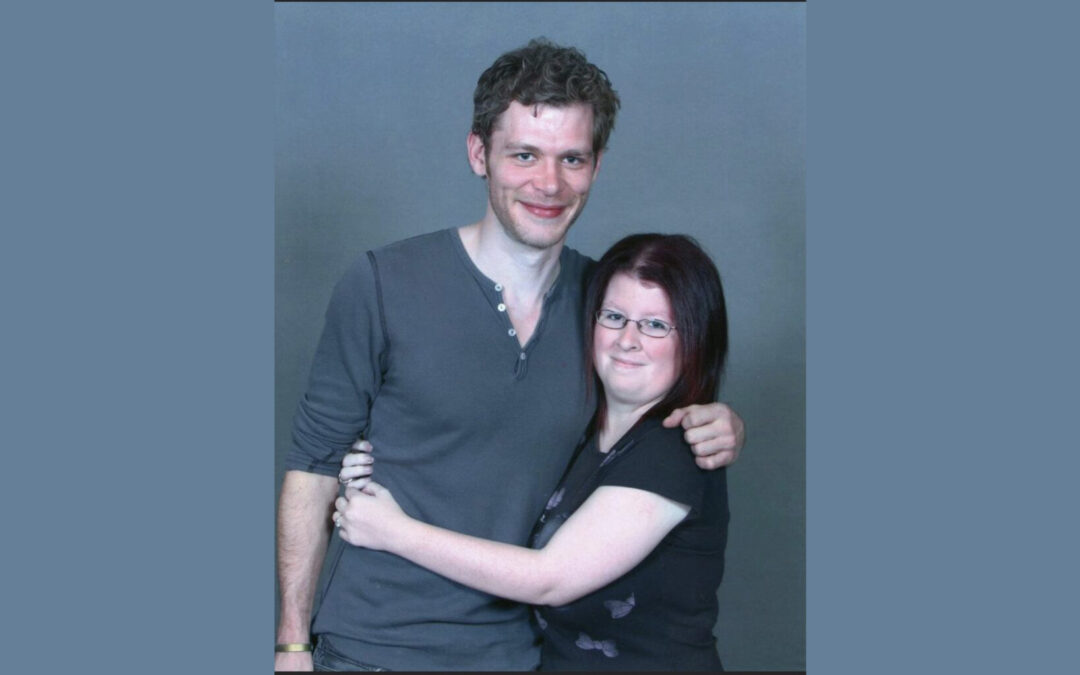 We have an “extra”-special treat this week with a behind-the-scenes look at what it was like to be in an Originals episode! Kelly Glanville, super-fan turned Originals tour guide, gave us a sneak peek at her experience as an extra in season 5.

In 2011, Kelly visited Covington, GA, for the very first Vampire Dairies convention and saw the show filming live. Not only did she love the filming process, but she lucked out and met Ian Somerhalder that day, too. “My life was over after that,” she said.

Kelly with Actor Ian Somerhalder at a Vampire Diary filming

After that fateful day, Kelly was on-site to watch filming whenever she could and finally moved to town permanently in 2016. By then, she was also into the Originals, which was filming season 4 just a few minutes away in Conyers, GA. And when season five rolled around, Kelly was ready to step beyond the sidelines and into the scene.

She applied to the show’s casting calls on Facebook and waited impatiently for them to reach back out to her. When they accepted her application, she “was super excited.” In fact, she still has her booking email saved.

Working as an Extra

Kelly was cast in Season 5, Episode 3, during the scene when Elijah and Antoinette are in Central Park.

The costume director instructed her to show up to the filming at Lenora Park dressed like it was fall in New York. (In reality, it was August in Georgia!) Luckily the filming happened at night, but she remembered it was still very humid.

Kelly was on set from 6 pm to 6 am, watching the filming and enjoying the free food. It was a lot of waiting, but she still enjoyed the experience. (And it was much calmer than when she spent 5 hours rollerblading for a Black Lightning scene that got cut!)

In the end, the directors blurred out the background, so you can hardly see her, but Kelly still had a great time. “I liked watching how they set everything up and then going back and seeing how they put it all together on TV.” 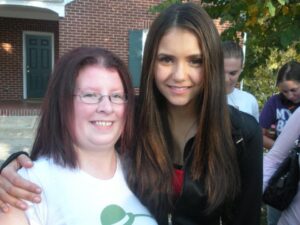 On the sidelines with Nina Dobrev

While she enjoys occasionally working as a cast member, Kelly says that she likes watching from the sidelines just as much because they’re different experiences.

One of the biggest drawbacks of being an extra is the inability to interact with the core cast members. “If I know a scene is going to have a cast member I’ve never met before, I don’t want to work it,” Kelly said. She’s also opted out of a few special episodes she wanted to watch unfold, like the Season 8 finale of TVD.

Personally, it seems like she’s found the perfect balance of the two because her list of autographs and selfies includes Joseph Morgan, Daniel Gillies, Phoebe Tonkin, and pretty much every major character to roll through both shows. 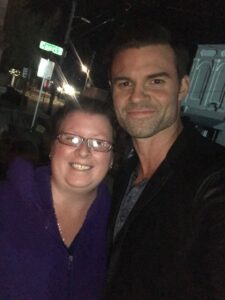 Kelly also has a treasure trove of knowledge about the show from watching the filming take place over the years, which she’s happy to share on one of our Originals tours!

If you’d like to book a special behind-the-scenes tour with Kelly or one of our other expert guides, fill out the form below and reserve your spot today!

And if you’d like to read about what it was like to be an extra on The Vampire Diaries, check out this interview with Christie Copeland!