See Where the Vampire Diaries Filmed in Conyers, GA!

Did you know that the Vampire Diaries did some filming in Conyers? That’s right! Long before the Originals turned Conyers into Georgia’s French Quarter©, TVD used our streets and buildings for filming.

Today, we’re giving you all the details you need to see exactly where they filmed in our town, so you can revisit your favorite scenes!

The first time Vampire Diaries came to Conyers was in the episode “Bloodlines,” when Damon and Elena take an impromptu trip to Atlanta. They end up at Bree’s Bar, which is owned by one of Damon’s former love interests.

The Conyers Welcome Center (901 Railroad St, Conyers, GA 30012) was used for the exterior of Bree’s Bar! You can see it in the background while Damon and Elena are in the parking lot. 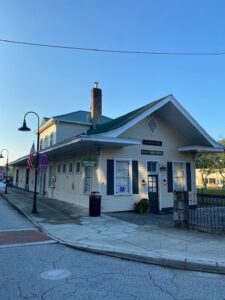 In “Ordinary People,” Stefan’s humanity is turned off. Damon frees Stefan from Lexi’s “rehab” and takes him to a bar, hoping to convince Stefan to turn his humanity back on.

That bar is The Whistle Post Tavern (935 Railroad St NW #5259, Conyers, GA 30012)! You’ll recognize it in the background as Damon and Stefan talk, starting around 17 minutes into the episode. Better yet, you’ll get to see the bar Damon dances on with the bartenders while Stefan drinks from a patron nearby (26 minutes, 46 seconds). 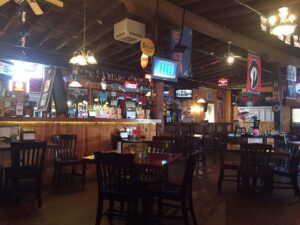 In “We’ll Always Have Bourbon Street,” Stefan and Damon return to New Orleans to retrace their steps from 1942 in search of a way to break Elena’s sire bond.

The first place you’ll want to visit for this Vampire Diaries episode is The Celtic Tavern on Commercial Street (918 Commercial St NE, Conyers, GA 30012). The interior of this Irish pub was used in several scenes during the episode. It’s where Damon meets Charlotte (the girl sired to him) in 1942, and she snaps a man’s neck (10 minutes, 30 seconds). 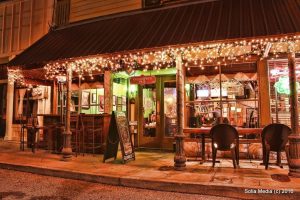 It’s also where Lexi and Stefan find Damon right before Stefan ships off to war, and Damon promises to join him (15 minutes).

When Damon fails to break Charlotte’s sire bond, he leaves her at the corner of Bourbon and Dumaine with the command to count every brick in New Orleans. The brothers find her there, still waiting for Damon (20 minutes, 22 seconds). The building they talk in front of is the backside of Creamberry’s Ice Cream (925 Commercial Street, Conyers, GA 30012).

Finally, head back to our Welcome Center to see the train station where Damon goes to meet Stefan. Inside, Lexi tells Damon to stay behind because he’s a bad influence. Both the interior and exterior were used for this scene (33 minutes, 50 seconds).

“Moonlight on the Bayou” Season 7, Episode 14

The last stop is a quick one, but don’t miss it! In “Moonlight on the Bayou,” Stefan is being chased by Rayna Cruz. He stops at a gas station to buy a charger. When he parks the car, you can clearly recognize our Milstead Food Mart (1355 Milstead Ave NE, Conyers, GA 30012). They even kept up the original signs for filming!

If you’d like a guided tour of these locations with more insider information, reach out to our team at Filmed in the South to book today!